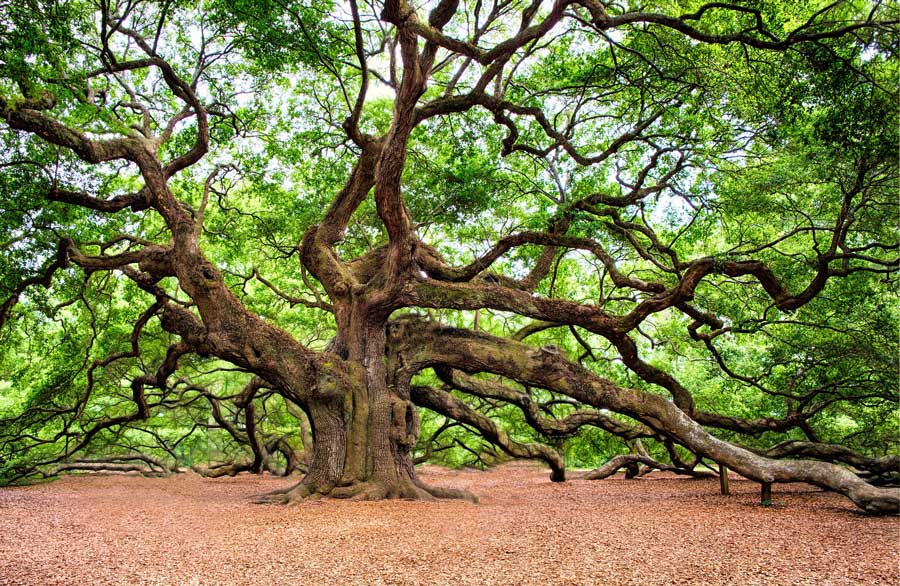 Among all plants and trees, the Oak is perhaps the species that has left the deepest imprint in Western culture and collective imagination. It’s present in many ancient mythologies as a symbol of strength and justice, often associated with the divinities that embody these values.

Oaks are part of the Fagaceae family, along with Beech and Chestnut trees. Their distribution is quite wide, spanning throughout the Northern hemisphere, in the temperate and tropical areas of America, Asia, Europe and North Africa. In Europe, the most common type is the English oak.

Oak trees are well known for their great adaptability, a characteristic they share with the human species. It’s possible to find Oaks at different latitudes and longitudes because, unlike other plant varieties, they have learned how to adapt, to convert and to combine. In Nature from 250 to 450 varieties have been classified until today.

Oak trees can reach a height of about 30 meters: for this reason, perhaps, they have always inspired admiration and respect. They can also live long: some specimens exceed 500 years. However, their growth is very slow and this, over the centuries, has caused the Oak forest to lose ground in favor of other species.

Oak wood is considered particularly valuable: it’s mostly used for the construction of wooden furniture and floors as well as in many other carpentry and building applications. The most important variety is Durmast Oak, particularly suitable for the production of refined furnishing elements. It’s also used to make barrels for wine aging, also used for grappa, rum, cognac and other kind of distillates.

Oak wood, in fact, is particularly rich in tannin, which is released over time into the wine helping to define its taste and ”character“. Oak tannin can also be added to wine in order to enhance its natural qualities, evoking vanilla and licorice notes to the palate, as well as imparting softness and ”volume“ in the mouth. When added during the refinement and aging phase, it helps to regulate the reduction oxide potential in the oxygen-wine exchange. It also performs a balancing action against herbaceous and bitter compounds.

The tannin extraction from Oak wood was already occurring in the Middle Ages, since Oak tannin was used in the vegetable tanning process: a tradition that outlived across the centuries.

The link between Oak and tannin is twofold: in fact, it’s possible to extract tannins from both Oak wood and Oak Galls, abnormal swellings or localized outgrowths of plant tissuethat form in response to attack of fungi, bacteria or insects prinks.

The Oak, symbol of strength and justice

In Ancient Greece the Oak was considered a sacred tree to Zeus and, as such, a symbol of justice and moral rectitude. A symbolism that crossed the centuries: many heraldic coats of arms show acorns or oak branches intertwined.

The Oak is also part of many myths: the golden fleece at the center of the Argonauts’ story was stolen by Jason from the branches of an Oak tree, while the guardian dragon was distracted. Hercules club was made of Oak wood. In the Odyssey it’s said that Ulysses interrogated twice the Oak foliage to foretell his future.

In the Celtic culture the Oak takes on an even more mystical value. The figure of the Druid, for the first time told of in De Bello Gallico a text by the Roman Emperor Giulio Cesare, has in fact a fundamental role in relation to this sacred plant. The Druids were priests but also judges and teachers and their relationship with Nature was at the center of propitiatory and magical rites. It’s said that the Druids used to listen to the rustling of Oak leaves blowing in the wind to interpret the divinatory messages and indicate the actions to be taken.

The link with magic does not end here: the oak leaves were used as ingredients for potions, rituals of protection and purification.