Nature Printing and tannin: the return to vegetable colours 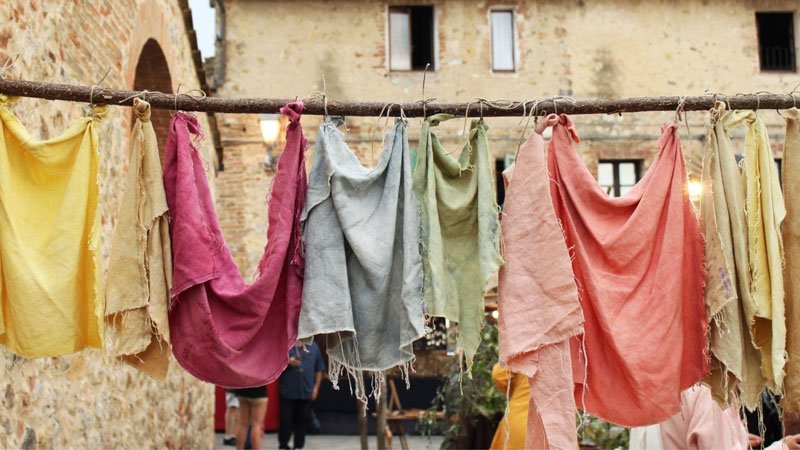 Since prehistoric times, tannin has played a crucial role in the creation of colours, as the first form of visual communication.

To get to the origins of the use of coloured pigments, we have to go back about 70,000 years, when Neanderthal man sprinkled the bodies of the dead with a powder of ground red ochre, representing the colour of blood.

It was not until Neolithic times that tannin began to be used for artistic purposes: rock art, which has survived until today, is the most concrete example. The colours used were mainly red, black (extracted partly from tannin), yellow and white, made from natural pigments mixed with ingredients that could bond to surfaces, such as lemon juice, casein and beeswax.

The need to decorate the body led to the development of processes for extracting colour from plants and later from animals (cochineal) and minerals (lapis lazuli).

The extraction of colour from natural elements also made it possible to dye textiles and leather, especially by mixing pigments with oil, creating different shades and contrasts.

The first synthetic colour was only created in the second half of the 19th century, and within a few decades it completely replaced those of vegetable origin.

Nature printing: Tannin as a sustainable alternative to synthetic dyes.

In recent years, consumers and manufacturers have become increasingly aware of the environmental problems associated with the use of synthetic dyes, awakening interest in ‘old’ and environmentally friendly processes.

The waste water from synthetic dye production and chemicals used in textile dyeing processes can have a negative impact on human health and our planet. On the other hand, dyes based on natural products – such as tannins – not only use no toxic substances, but the waste elements are easily recyclable and, even if scattered in nature, have almost no impact on the environment.

The use of natural dyes has therefore made a comeback, especially given the growing interest in renewable and sustainable fabrics and fibres.

For example, hydrolysable tannins are the most widely used in textile dyeing processes, due to their solubility, their colour characteristics and their ability to interact strongly with the substrate through the use of metallic salts.

They are classified as “mordant dyes”, since they require an etching process with iron salts to form the black and blue colour. Especially the tannin extracted from the galls has been used – since ancient times – for the black production.

The tannin mixture has a specific composition depending on the type of plant from which the extract is obtained, from which a dye with particular colour characteristics is prepared. The most common method of extraction uses hot water and vinegar in which the plant’s harvested products are soaked and ground.

Have you ever noticed that some fruit stains are particularly stubborn and don’t seem to go away despite several washes? Plants and fruits, in particular grapes (and therefore also red wine) and medlar, which are particularly rich in tannin, have the ability to fix themselves to the fibres and colour naturally.

The colouring power of tannins was also known in ancient times and not only as a pigment: oak, chestnut and fir were used as bases for painting on boards. However, artists used them with extreme caution, as they were capable of affecting the painting’s colour, even though the wood was seasoned.

Nature printing is particularly effective on textiles of animal origin. Unlike vegetable fibres, wool or leather consists of protein material that can bind to the elements responsible for colouring. The pigments are therefore easily absorbed and then fixed to ensure brilliance and durability.

Are organic dyes the future?

Yes, if companies and consumers are open to change.

Unfortunately, we are all part of a huge consumerism mechanism, which is making it more difficult. It is important to increase people’ awareness to invest in durable and environmentally friendly products, despite their high cost.  Even though some manufacturers are already using combinations of natural and synthetic colours, it will be difficult to switch to completely ecological production processes in the short term.

But manufacturers have to embrace these changes first: this is the only way they can hope to win over this new and demanding market segment.

And you? Do you pay attention to the dyeing process before buying clothing or accessories?